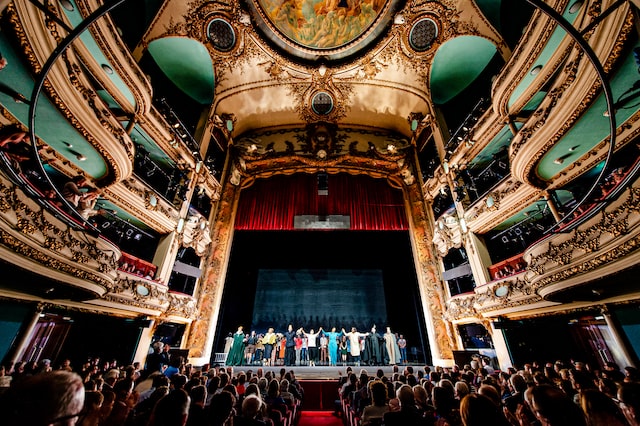 “Kontakthof”, the choreographer’s historical masterpiece, has just entered the repertoire of the Parisian ballet

All in a group at centre stage. The boys in dark suits, the girls in evening gowns with short, swathing skirts. They advance compactly while the music of Anton Caras’ ‘Third Man’ resounds. United by the same step, balancing on one leg while bending the other crossed in front. It is one of the iconic images, pardon the banality, of ‘Kontakthof’, Pina Bausch’s masterpiece that has just entered the repertoire of the Paris Opera ballet.

And immediately it must be added that the company tackles it superlatively, with intensity and the awareness of being at the centre of a ‘Stück’, to put it in Bauschian, that will go down in history. Stück from 1978, but, like all masterpieces, absolutely topical. Because it tells us about ourselves, our anxieties, weaknesses, affections, fears, desires. All sentiments that are part of the repertoire of the great German choreographer, who died in 2009, sublime as ever in plumbing the human soul. We are in a vast 1950s ballroom. A mirror, a door on the right, a curtain at the back, raised above the stage. The stage is designed by the late Rolf Borzik, a great collaborator of Bausch’s, while the company is now directed by Jo Ann Andicott.

It is there, in this place of contact, the place where people meet, flirt, fall in love, conquer and seduce, that what would be easy, as has rightly been said, to call a ‘war of the sexes’ begins. Because here there are no winners and all 26 performers, equally divided, are somewhat defeated, overwhelmed, frustrated.

Around the stage a theory of chairs that would go down in the history of Bausch mythology as the famous walks, the dancers’ catwalks. But everything here appears for the first time. The piece is in fact among the first that Pina did for Wuppertal after ‘Café Müller’.

And everything moves. Starting with the repeated catwalk, in a diagonal, in a circle, which Wim Wenders would take up in the film ‘Pina’.

A list of everyday gestures, winking smiles, hysterical laughter, looking at each other’s hands, shoes, checking make-up in an invisible mirror. Then gossip. Love with a blow-up doll. The frustrated attempt of a dancer to slip into the unison of his comrades in line. Or the unleashing of a rhythmic rock tune, each occupying the stage with his own dance.

All gestural, but sometimes also verbal ‘leitmotifs’, skilfully blended. So talking about oneself and one’s problems, all together, to an unknown interlocutor: when they line up the chairs on the proscenium, and give life to this collective confession, while one of the protagonists passes a microphone from one to the other. Follow on a screen, lowered to the back, a documentary on the life of wild geese. Shaking their asses, showing their backs to the audience, to the notes of ‘Titina’.

Because the music, the waltz and tango repeated over and over again, was already vintage in ’78 at the time of creation. And today it is even more so.

“Kontakthof” is a show that you never cease to love and that has not lost an ounce of its charm. Even when it was tackled for the Wuppertal company, by the over-65s, or even by teenagers (both seen in Italy). Because it is an architecture built on a solid, resistant base. Even if danced by another company. But here we are talking about the Paris Opera, artists truly at the top of their game, who on the same days are presenting ‘Swan Lake’ at the Bastille Theatre and ‘Kontakthof’ at Garnier.

Two classics of the 19th and 20th centuries. A programme conceived by outgoing director Aurélie Dupont. It remains to be seen what choices will be made by José Martinez the newly appointed director, a Spaniard born in Cartagena, but actually a long-time étoile at Palais Garnier.